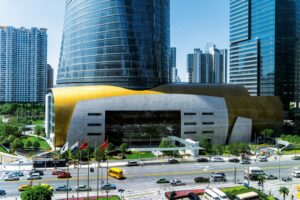 One of the world’s tallest buildings is putting sustainability up high where all can see! 🇨🇳

Adjacent to the Jin Mao Tower and Shanghai World Financial Center in the centre of the Lujiazui Finance and Trade Zone sits the 632-metre tall Shanghai Tower. By prioritising public space and placing shops, restaurants and urban amenities at the atrium levels, the building revolutionises the living and working experience for all building users 👩‍💼

The tower has been awarded more than 11 awards and a China Green Building Three Star rating, as well as a LEED® Platinum Certification from the U.S. Green Building Council 🏆 How come?

Shanghai Tower features up to 43 different sustainable technologies, including renewable energy sources, extensive landscaping which cools the tower, and a beautiful design that improves the building’s wind resistance. These have resulted in reducing its total energy consumption by 21%, cut its carbon footprint by roughly 37,000 metric tonnes annually as well as saving US$58 million in material costs.

It also includes 6,700 water control valves which contribute greatly to the efficiency of heating, ventilation and air-conditioning systems within the tower.

Impossible achievement without the combined efforts of all #buildingheroes involved!

Our definition of a work-life balance is always evolving. PATRIZIA is taking it to a whole new level with Antonian Amsterdam.
Read more
Blog
Building heroes

Singapore is not waiting on the rest of the real estate industry – this building demonstrates its status as a global leader in sustainable real estate!
Read more
Blog

Last week I attended PROVADA, an interesting networking and knowledge event for the real estate sector. The theme this year was 'Act now for a better tomorrow' and that was reflected in the program. There is of course a lot to see and learn at PROVADA, I would like to share four special trends that I saw at the fair with you.
Read more

Book a demo
Manage Cookie Consent
To provide the best experience, we use cookies on the website to process data such as browsing behaviors. Not consenting may affect certain features and functions. Go to our privacy policy for more info.
Manage options Manage services Manage vendors Read more about these purposes
View preferences
{title} {title} {title}